Tibor ANDRÁS (1921-2000) painter - teacher born to a Székely family which just moved to Budapest from Transylvania, before the devastating Treaty of Trianon. He was first taught in the way of arts by his mother, who was a talented, yet unfulfilled, painter herself. He was admitted to the Hungarian Academy of Fine Arts in 1941, where his masters were Rezső Burghardt, 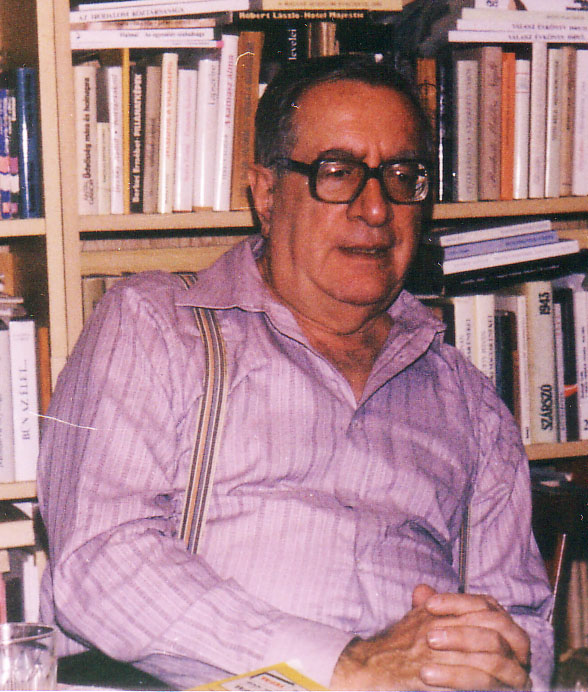 Aurél Bernáth and Jenő Elekfy (aquarell) – the most influential Hungarian painters of the time. During his time there, he became friends with the outstanding graphic artist Gyula Máté, and the noted painter Hugó Matzenauer. He was required to enlist in the army in 1942 and participate in the Second World War. Heeding his father’s advice, he completed a training for officers and could become a war correspondent, avoiding the tragic fate of most Hungarian infantry. After the war ended, he returned to work as a simple bricklayer in the destroyed city of Budapest, but resumed his studies at the university from 1946. However, his right-wing political views got him expelled in the last semester. Later though, he went on to graduate as an art teacher in 1958. During this period, he worked for a silk painter company, teaching many people the art of painting. Later, he became a teacher of fine arts in one of Budapest’s elementary schools. For a few years, he also practiced as a designer of cartoon films at Pannonia Film Studio, and in the seventies, even created his own animated cartoon. For the rest of his life though, he remained a teacher of arts. It is notable, that a few enthusiastic pupils of his went on to become professional painters. Most notably: Sándor Balázs Papp and András Wahorn.

In 1956, the historian Gyula László invited him to participate in an exhibition commemorating the 500 years anniversary of the Siege of Belgrade (1456). This was one of the most famous battles of Hungarian history, where John Hunyadi defeated the Ottoman Empire. (John Hunyadi was a leading Hungarian military and political figure in Central and Southeastern Europe during the 15th century.) His painting of the battle won the award of the exhibition, and was then shown in the Hungarian National Museum during the 1956 revolution.

Hungarian history – especially the 17th century – inspired the subjects of his large size historical paintings. He spent almost twenty years painting the four large-scale paintings of Hungarian history, but this work was never exhibited in his life. The books of the noted historian, Sándor Takács inspired and shaped his views on Hungarian history. However, besides depicting history, these four paintings also have a symbolic meaning, a hidden message. That time it was evident for Hungarians that the captives in his painting refer to the imprisoned revolutionists of 1956, the dead bodies refer to the victims of the soviet invasion, while the other two are metaphors about Hungary, which was a satellite country of the Soviet Union at the time. He personally documented the revolution by going out to the streets and drawing graphics and taking photos. These were published in 1989 in Magyar Nemzet, a leading newspaper of the time, and the drawings were exhibited some time later.

After the fall of the 1956 revolution, his sentiment turned pessimistic. He lived a reclusive life, worked and painted for a small, closed audience, sometimes even just for himself. However, he never turned passive, and continuously documented the moments of everyday life, the beauty of nature and the human body. He worked in many different styles and used various techniques. Besides painting silk, he created lampshades, built mock-ups of ships, railroads and even toy castles for children. When not pursuing his art projects, he studied the ancient Egyptian, Greek and Japanese culture and art. This was a source of inspiration for him to paint various religious subjects.

He also collected the Lord’s Prayer in more than sixty languages, then wrote the texts in an artistic manner. This unique collection was exhibited in the late nineties and during year of 2002 in churches around Hungary. Besides the aforementioned subjects, he was also interested in Buddhism.